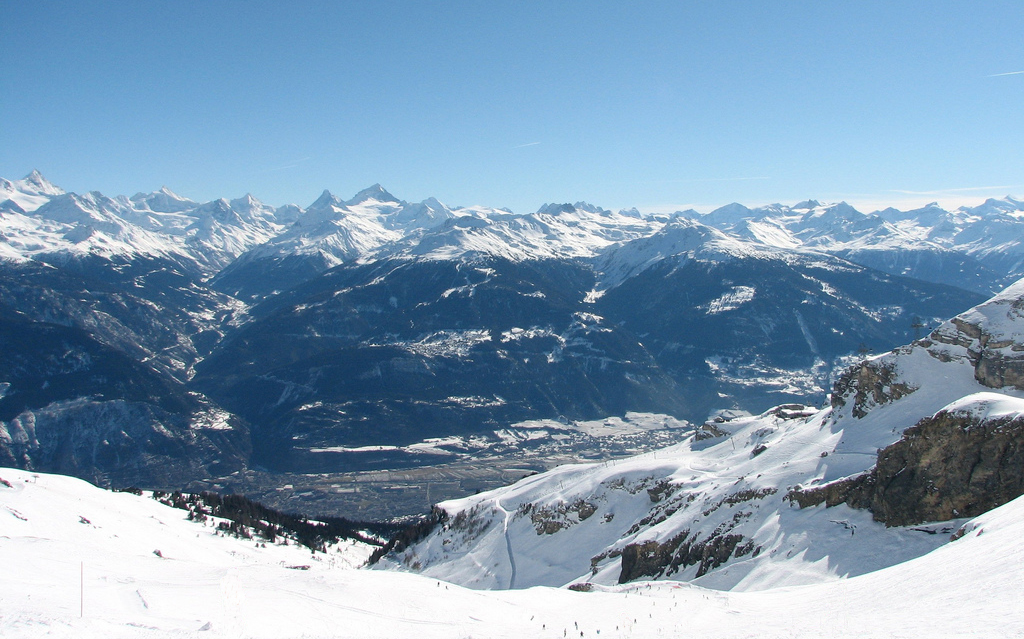 Everybody agrees Crans Montana, a Swiss ski resort encompassing the twin towns of Crans and Montana, offers great views and the chance of serious mountain sunshine.

It is the choice of the famous – Roger Moore lived here and Sophia Loren has an apartment – and is a recent recruit to ‘Best of the Alps’ group of resorts (the others are Chamonix-Mont-Blanc, Cortina d’Ampezzo, Davos, Garmisch-Partenkirchen, Grindelwald, Kitzbuhel, Lech Zurs am Arlberg, Megeve, Seefeld, St. Anton am Arlberg, and St. Moritz).

It also has smart hotels, shops and restaurants – French chef and restaurateur Michel Roux is another one who has a home here.

The trouble is that skiers are not always interested in the sight of mountains in the distance, and sunshine is not always the skier’s best friend – especially when slopes are south facing, as is the case at Crans Montana. And the towns are large by alpine standards – 11,000 people plus – and can be crowded.

Having said all this, there is decent skiing here. Located in the heart of the Swiss Alps (1,500 metres up), Crans Montana offers 140 kilometres of ski runs – just over 40 in number – served by 25 lifts of various sorts.

Most of the runs are of the cruising variety, but some are difficult enough to feature on the alpine racing tour. Crans Montana hosted the 1987 World Championships and is a regular for women’s events.

Included in the ski area are the Plaine Morte glacier (2,900 metres up) and a 10,000 square metre snowpark with rails, jumps, wall rides and more. The half-pipe which has 6 metre high, 150 metre long walls, is claimed to be the biggest in the region.

In winter the resort’s championship level golf course becomes a level cross-country piste.
However extreme the boarding, the weather here is relatively benign. Between November and March visitors can expect snowfall on around eight days of the month, totalling about 2 foot six inches worth of snow. Daily temperatures barely dip below zero – averaging a little over minus one in the three mid-winter months.

Crans Montana tries hard and augments its natural attractions with a full programme of events.
There are weekly torchlight descents, for example, and a winter mountain pop rock festival.
In summer Crans Montana hosts the Omega European Masters, a European and Asian Tour golf event (the golfer Sergio Garcia is also among the famous to have a home in Crans Montana) while it is a regular for bicycle racing events such as  stages of the Tour de France ,Tour de Suisse and Tour de Romandie.
Getting there is not too hard.
Geneva is about 180 kilometres (about 110 miles) and a two hour journey away. Zurich is a little further – 300 kilometres (180 miles) and three hours away. Bern is another possibility is Bern, also being about 180 kilometres away.

It is also possible to fly to Sion, which is only 30 kilometres away (plus 45 minutes by bus).
Trains run from Geneva and Zurich to Sierre from where there is a regular freer shuttle service to Crans Montana which takes around 35 minutes.