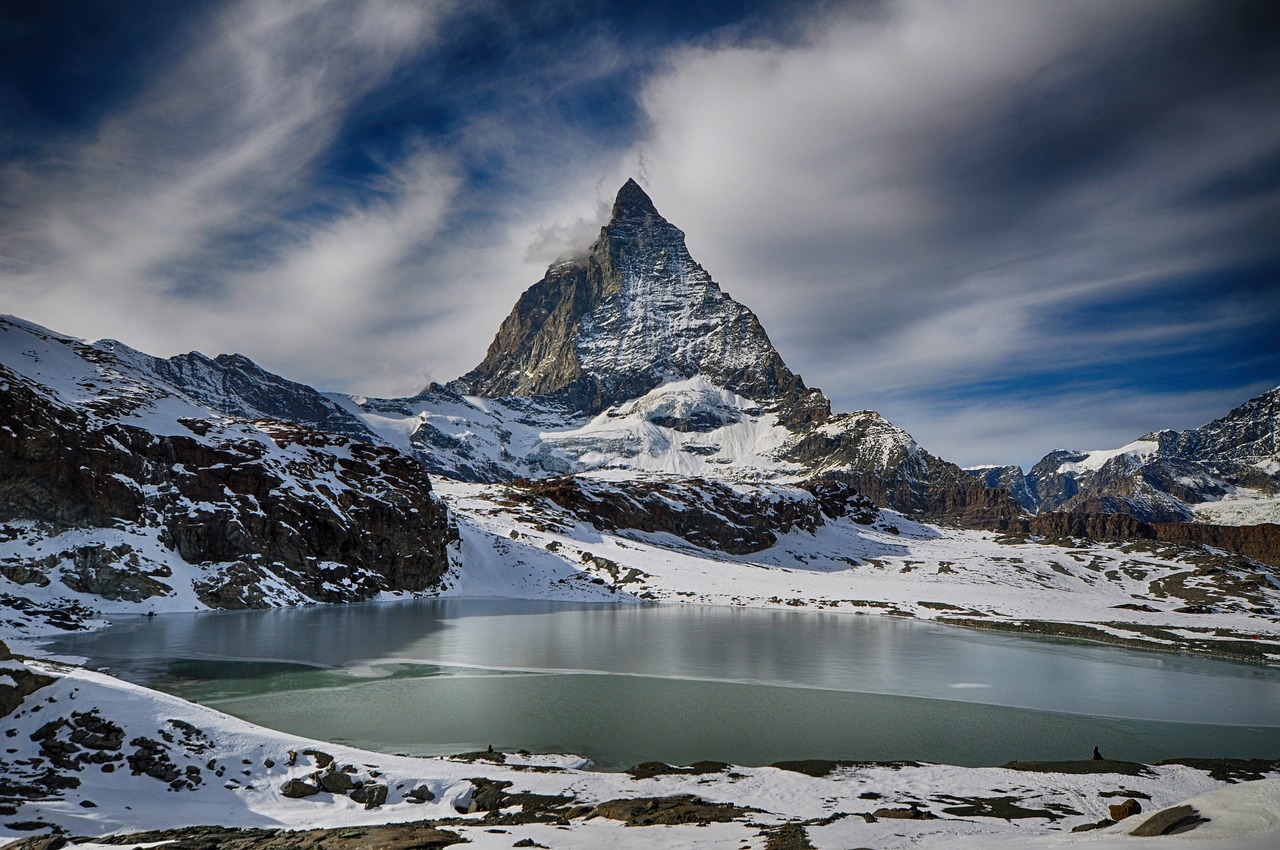 Once, the main sport was climbing. The town made the switch from agricultural village to tourist destination in the nineteenth century. In 1865 a party of British mountaineers conquered the Matterhorn – although only three of the seven made it down again. After that everybody wanted to go to Zermatt and climb the mountain.

As well as its climbing pedigree, Zermatt is nowadays famous for its great skiing. It also offers hiking, biking, skating, and much more.

The area is in the German speaking part of Switzerland, close to the Italian border. Zermatt itself is compact – just three main streets – it is car-free and bans the use of petrol and diesel engines for most purposes. Local buses and taxis are electric-driven.

The ski area is shared with the linked villages of Tasch (a 12 minute train ride away) and Randa. Tasch is the nearest that cars can conveniently come to Zermatt.

Temperatures between November and March average minus three degrees centigrade and can go down as low as minus eight degrees. In the winter it snows seven or eight days each month, dumping an average 21 inches of snow (the average yearly snowfall is just over 10 feet’s worth).

Even so there is extensive snow making equipment in place.

The high altitude – the area is surrounded by 38 four thousand metre mountains – makes for good skiing conditions and also makes it possible to skiing throughout the year.

Zermatt has four distinct skiing areas separated by valleys but all easily accessible from the town by funicular or cable car. These are Sunnegga/Rothern (furthest west), Gornergrat, Schwarzsee and the ‘Matterhorn glacier paradise’ (the highest).

Sunnegga, reached by funicular, is close to 2,300 metres up, and Rothorn (3,100). Between them is the Blauherd lift and cable car station which also gives access to Hohtalli (all but 3,300 metres) which is on the other side of the valley. It is from here that the Triftji mogul field can be accessed. It is also possible to ski down to Gornergrat (3,100 metres).

In all it boasts 200 kilometres of ski runs – 360 kilometres if Cervinia and Valtournenche are counted. The majority of runs are rated as ‘red’. The longest is 25 kilometres long. There are 32 lifts and railways of varying sorts for getting up the mountain – 52 in the wider ‘Matterhorn ski paradise’ area.

There is a snowpark for snowboarders and freeskiers that includes rails and jumps.

Perhaps because Zermatt is usually not the first suggestion for beginners the town has recently put much into promoting its family friendly credentials – in fact it has held a ‘Family Destination’ accreditation since 2003.

Building on this it has recently announced special concessions for children under nine. They will no longer be subject to the visitors’ tax levied on adults and – provided they don’t object to the connotations of holding a ‘Wolli’ card – those whose parents buy a multi-day ski pass will be given said card. It will entitle them to free unlimited lift usage, free accommodation in some hotels and various offers and discounts.

The resort also offers specially marked and policed ‘slow slopes’ where beginners and those who prefer to ski at their own pace can make easy descents.

Cars are a no-no in Zermatt, so the best way to arrive is by train – an experience in itself. There is a shuttle service from Tasch taking 12 minutes (the closest convenient place to leave cars). Those flying in the nearest airports are Geneva and Zurich. Trains leave from both for Zermatt and take between 3 hours 30 minutes and four hours. One change of train is usually involved.
There are also taxi and helicopter transfers available.