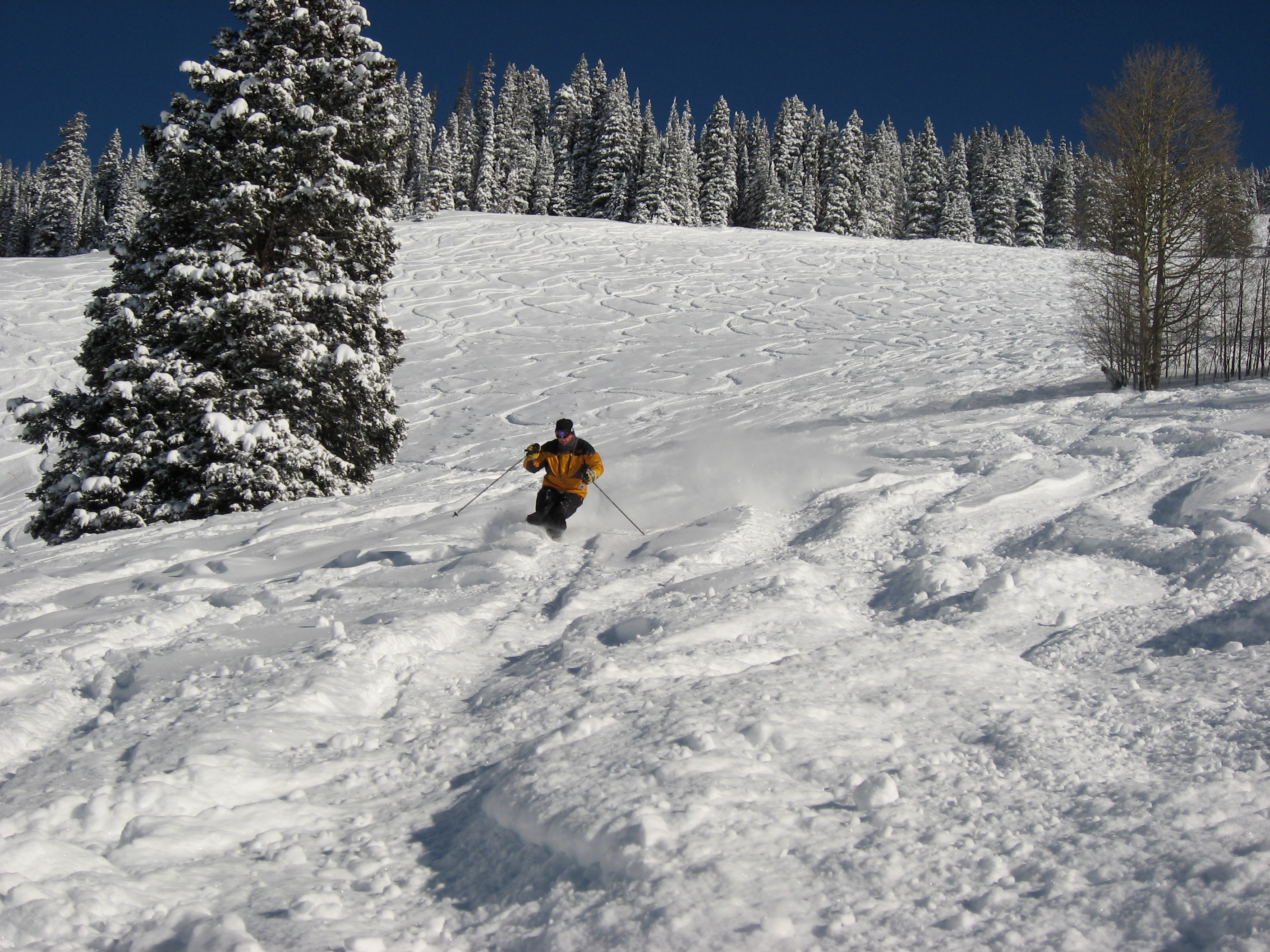 Vail is in Eagle County, Colorado. There are, in fact, three Vails, the town, the ski resort, and the mountain.The mountain came first, of course – but was not called ‘Vail’ until Colorado State Engineer Charles D Vail constructed the state highway that runs through Vail. Some 17 years after his death the ski resort of Vail was founded. It started as a commercial venture with three lifts built in an empty valley. The town came later – it was incorporated in 1966.

Vail town, the centre of which is pedestrianised, is high up – at over 2,400 metres. Vail mountain and its skiing area are even higher – just over 3,500 metres at the peak.

The town is relatively small – around 6,000 permanent residents. It is also a young person’s town – two thirds of the residents are under 44.

The ski resort now boasts 33 lifts and 193 marked ski runs. It claims to be ‘one of the largest ski resorts in the world with more than 5,200 acres of developed ski and snowboard terrain, seven legendary Back Bowls spanning seven miles, and the most groomed terrain on the planet’.

This being America with its passion for size, Vail town also has ‘the largest free shuttle bus system in the United States and has ten hybrid-electric buses’.

During the winter months the temperature regularly goes down to minus 13 or 14 degrees while the resort has average monthly snowfall of between two and three feet – an average of around 17 feet per season..

Vail Mountain has three distinct areas: the ‘Front-Side’, the ‘Blue Sky Basin’, and the aforementioned ‘Back Bowls’. Most of the ski area comprises wide open mountainside through which those groomed pistes snake down. Runs are of varying degrees of difficulty although the emphasis is on more difficult slopes with over half being classified as ‘advanced’. But that has to be put in context. Like US highways, many slopes are wide and made for cruising – on the whole more controlled than wild and woolly.

Vail is a board-friendly resort. It also often offers skiers the opportunity to ski in powder without venturing off-piste.

The slopes are served by a modern and speedy lift system that is continually updated.

Health and safety rules apply to lifts and slopes. Skiers are expected to act in accordance with Vail’s responsibility code which includes always staying in control and observing ‘rules of the road’ including allowing right of way to those ahead. And there’s no standing about in the middle of slopes getting in everybody’s way here.

And Vail warns skiers that ‘it is part of your responsibility under the Responsibility Code and the Colorado Ski Safety Act to avoid all obstacles and hazards’. In other words, you ski at your own risk.

For those not wishing to strike out on their own, complimentary ‘familiarisation’ ski and board tours are offered during the winter season.

Among others, there are also all-day complimentary over 60s tours for older skiers of advanced intermediate standard or above.

Most Brits will get to Vail via Denver International Airport, which is 120 miles (and getting on for two and a half hours) away.